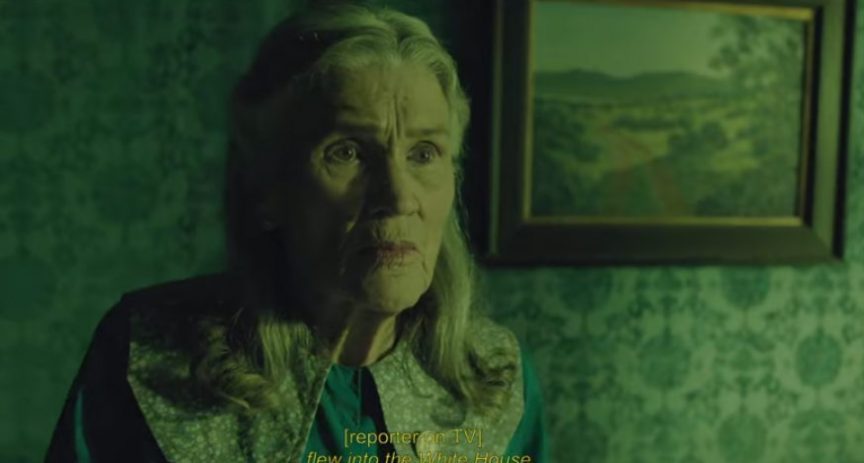 Last night I started watching the brilliant Afrikaans series 4 Mure, with tannie Lida Botha in the lead role as Marcelina and realised that  I grew up watching her in almost every South African movie and TV series as a kid. I had to really wrack my brain and some of the TV memories are very vague, but I recall her in roles in movies and TV series such as Nommer Asseblief, Die Vlakte Duskant Hebron, Het Van Verlange Kraal, Wolwedans in die Skemer, Ma-plotters, Veldslag, Simon en Sandra, Meester, Die Storie van Klara Viljee, Die Manakwalanners, Meeulanders, Invictus, ‘n Pawpaw vir My Darling and even a role in and episode of the very popular American action TV series from the 90s,  Tropical Heat!

Tannie Lida’s role in 4 Mure was that of a charming yet incompetent hotel cleaner which she played brilliantly and it got me wondering what other “recent” work this 70-something year old auntie could be found in in terms of streaming. I got a moerse shock, because I found another nineteen(!) titles featuring Lida which you can stream right now. But the biggest shock was her age! This lady is so light and quick on her feet that I was truly convinced that she was in her mid to late 70s. It turns out she is actually closer to 90 at the age of 86!

Go find her in these movies and TV series, make your pick and stream it this weekend.
My personal favourites are marled with an asterix (*):

Fiela se Kind – as Barta van Rooyen (*)
Any South African should be familiar with the Dalene Matthee classic . This is the original Katinka Heyns classic starring Shaleen Surtie-Richards and Dawid Minnaar

Vallei van Sluiers – as Ta’ Effie Roberts
This movie follows the lives of three fruit farmer families, the De Bruyns, Robertse and Van Rhijns and everyone else who gets drawn into the quarrles feuds and family scandals.

Hoofmeisie – as Tannie Betsie
There can only be one and at a prestigious school the race is on to become the new head girl. For Nadia, this would be a dream come true. But she has a lot of competition from other students and their parents.

Oupa en Ouma Sit op die Stoep – as Debora Vermeulen
This series deals wit the different aspects of growing old and adjusting to be grandparents. Deborah’s niece, Annas, stays with them in their house, and their son, Seuna, gets the responsibility as their caregiver.

Die Boekklub – as Bettie Niemandt
Tom Niemandt takes an unexpected trip to the Karoo, and meets an eclectic group of people who change his life forever.

Donkerland – as Ta’ Emily (*)
The story takes place on the farm, Donkerland and spans a period of over 150 years. It follows the De Witt family’s struggle of survival over seven generations.

Hollywood in my Huis – as Ouma Kruger (*)
Jana van Tonder is inspired by Charlize Theron’s Oscar win in 2004 and decides to have her own “Hollywood Red Carpet” glamorous event for the matric farewell.

Hoener met die Rooi Skoene – as Enith Conradie
Bonnie van de Byl discovers the body of her boss, a Mossel Bay businessman, and decides to take it upon herself to find out who the killer is, despite the efforts of Constable Mickey Mentz.

Vrekfontein – as Buks du Plooy (*)
For 30 years, Valk Volschenk has been the men’s singles champion in Vrekfontein. When an ambitious documentary filmmaker arrives in town, a dark tale in white tennis clothes is exposed. This short film is fokken hilarious!

Susters – as Kitty
Jo, Cecile and Lexie are adopted sisters who head off on an insightful trip through the Karoo with a male nurse.

A Boere-Krismis – as Esther Botha
A chaotic South African Christmas comedy. In Claire’s final attempt at becoming an actress-director-writer, she uses her fiancé’s family in a docu-film to launch her failed career.

Hotel – as Hettie (*)
‘n Sidesplitting South African mocumentary and the first of its kind locally, which follows the quirky personnel of a small town boutique hotel.

Die Spreeus – as Mev. Erasmus (*)
The “Spreeus” take on cases that make other detectives’ hair stand on end. Bas and Beatrice are the fearless members of an investigative unit which tracks crime into other worlds.

Kanarie – as Mrs. Visser (*)
One of my all-time favourite South African movies featuring comedian Schalk Bezuidenhout who showcases his dancing and singing skills in this coming-of-age musical war drama. The film follows a young man’s journey to discovering who he really is through hardship, camaraderie, love and music.

Griekwastad – as Ouma Bettie Steenkamp (*)
After the 2012 murder of a family on their farm, the tough search for the truth around the murders begins.

Poppie Nongena – as Ansie (*)
In this harrowing examination of the injustice of South Africa’s apartheid-era Pass Laws, a woman who loses her right to live in the city, fights to keep her family together.

Rage – as Hermien
What is supposed to be the best holiday of their lives turns to horror as a group of teenagers is picked off one by one in a small coastal village. Jirre, I haven’t watched this yet, but it sounds like I need to check it out!

Orion– as Carolina de Jager (*)
A damaged ex-cop describes himself as trash and acts self-destructively. He reluctantly agrees to take on a job for an attorney, investigating a murder. Also featuring our South Africa’s other Hollywood star, Neil Sandilands.

‘n Kombi, Kameelperd en ‘n Camcorder – as ouma Dorothy (*)
A Silwerskermfees entrant of 2018, this movie follows the story of four friends who pick up grandmother Dorothy for her granddaughter Celia’s wedding. The wheels come off between the Happy Endings Old Age Home and the wedding in Potchefstroom. Also stars long-time friend of Watkykjy and accomplished actor, Hannes Brummer.

Each week we take a number from 1 to 10 from our list of suggestions and put it through a randomizer to choose a trailer to show you. This week it landed on our number 3 spot, “Fifteen reality love shows to stream”  and from that list we selected “Love Island”:
Get ready as some seriously hot singles take over the hottest villa in the Balearics for six weeks of sun, sea and smooching in their quest for the ultimate summer romance and £50,000 prize!: