Welcome to the second Friday of 2021 or as most of us know it: Monday the 39th of December, 2020. I’ve got a feeling that this coming year is going to moer as fokken hard, so I would like to live in the past for a little bit. Not last year, not the year before last when the only thing we had to worry about was load shedding. No, I’m rewinding the clock all the way back to at least the year before YouTube. Today, we’re looking at 10 nostalgic TV series are older that 15 years but still remain cool as fuck! We’ve even included two very lekker Afrikaans series.

Have fun, wash those hands and remember – the best way to social distance is with some snacks and pineapple beer in font of the TV…

Sex and the City (7.1)
Can you believe that Sarah Jessica Parker is still married to Ferris Bueller after all these years? Since like a year before Sex and The City came out in 1998. Normally you count in double dog years for marriages in Hollywood. Take a nostalgic trip and watch all six seasons about columnist, Carrie Bradshaw and her three close friends as they navigate the pitfalls of dating in the Big Apple as thirtysomethings and gossiping about their sex lives or lack thereof and  having fun and making names for themselves in their careers.  This was the first TV  show to win an Emmy for Outstanding Comedy Series.

The Sopranos (9.2)
This series turns 21 this year and is still one of the all time best rated TV shows ever. In fact, it is still in the top 20 standing shoulder to shoulder alongside Game of Thrones.  It follows the story of Tony Soprano, a mob boss who took over from his uncle before him, who took over from Tony’s father before that. The entire family have their fingers in all the pies. James Gandolfini was so invested in his role, that he put a small stone in his shoe to anger him in order to portray the role of Tony Soprano more effectively. He also sometimes stayed awake all night so he could look like shit for the breakfast scenes. That’s dedication and this is kick-ass TV and you should stream all six seasons. Or I’ll tell Tony…

The Wire (9.3)
If you wrote matric 2 years ago, you were born the same time as The Wire. Nineteen years later, it is still in the top 10 of all time best television series.  Step into the streets of Baltimore’s inner-city drug scene, tough as nails cops square off against sly and ruthless drug dealers. It is a brilliant crime thriller where the lines between right and wrong seem blurred at the best of times.

Song vir Katryn (6.7)
Jirre shame, back in 2003 South African actors started panicking about their job security because Afrikaans rock stars were given the acting roles in films and TV series. Valiant Swart got the lead for Song Vir Katryn and I suspect the low-ish rating is a bit unfair. Sure, his acting truly sucked in the first few episodes, but the guy stepped up to the plate and this became the most widely watched and popular Afrikaans series until 7de Traan rocked up and spoiled the party.

House  (8.7)
This series turned sweet sixteen last year! Dr House is at best a bully and worst somewhat of a dickhead at times. He’s also a medical genius and if he was a real person, he would be the Check Norris of the medical world who would kick the coronavirus’ ass! It real life, Hugh Laurie’s dad was a doctor and once said that he felt a bit guilty “being paid more to become a fake version of my own father.” He must have made a fortune, because doctors ain’t poor!

Rome (8.7)
Rrrrrrrrrrrrrome!
(you have to roll the R with your thickest Afrikaans accent)
I’ve probably said it a million times, but HBO don’t make no shit TV. The series shows in brilliant detail the lives of the most ordinary and the wealthiest citizens during the times of Julius Caesar. To date, this shows outdoor sets, spanning over five acres, are still the world’s largest standing set!

Robot Chicken (7.7)
This is a very specific form of stop motion animation that would probably not sit right with people who have a fear of clowns, Barbie dolls, Tim Burton movies and any bottom Jeff Dunham inserts his right into. It has that look, you know? But if you’re into it and you like Seth Green, pop-culture parodies and sketches featuring three-dimensional toys, action figures and dolls, you’re at the right place. If it weren’t successful, how would it still be going strong after 15 years?

Dexter (8.6)
We got introduced to Dexter Morgan just over 15 years ago. Now is right time to revisit this iconic series of the forensics expert by day, serial killer by night because the series just got a limited reboot. Trin-tin-tin tin-tin! Can you still hear the theme song and see the clever intro with the food?

Orion (8.0)
I completely missed the bus on this excellent limited Afrikaans murder mystery series, not because I was so dik into Dexter but because back in 2006 I was living in Nigeria and for obvious reasons, DStv in Nigeria didn’t broadcast in Afrikaans.  Orion follows the story of a damaged, trashy ex-cop who acts self-destructively and reluctantly agrees to take on a murder investigation for an attorney. From what I’ve heard, this is some  of Neil Sandiland’s best work, so I am really looking forward to klapping the 10 episodes before the end of this month! 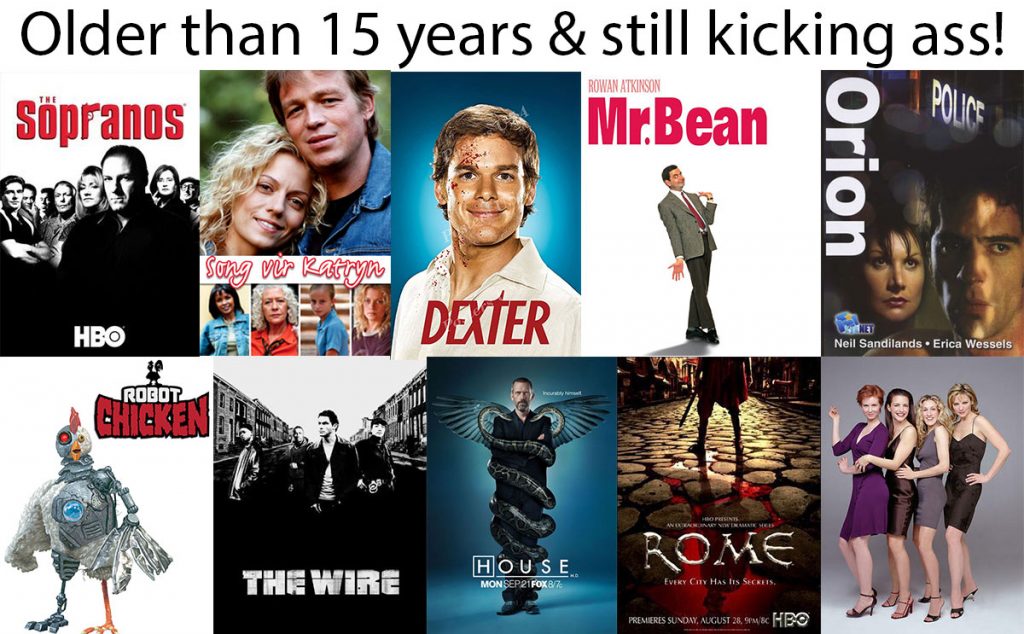 Each week we take a number from 1 to 10 from our list of suggestions and put it through a randomizer to choose a trailer to show you. This week it landed on our number 9 spot, “Interview: Schalk Bezuidenhout on wine, fast cars and the year 2020” so let’s sommer klap the trailer for Hotel, shall we?:
In Season 4, there’s peace and harmony in Fransenburg, now that Ferdie has cut his political career short. He’s on the hunt for another way to leave a legacy, however, so the drama is far from over. The hotel is under threat as the new mayor is considering demolishing it to make way for the Mautrain, and Jony has a new love interest who is complicating things for Thomas…