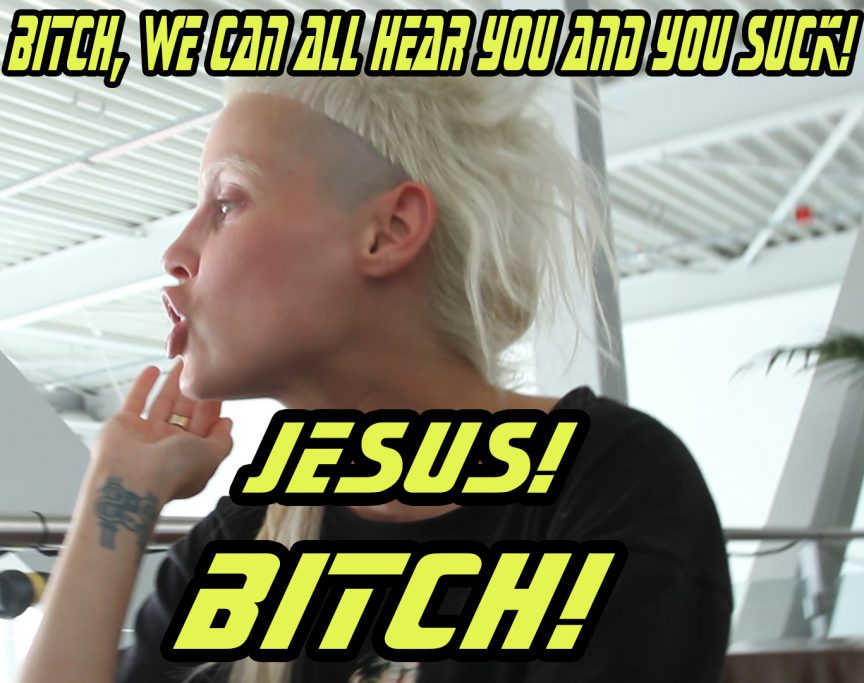 Natasha Khan, professionally known as Bat for Lashes, is a very talented singer, songwriter and multi-instrumentalist from London. On Saturday, June 23 back in 2012, she was on the bill to perform live on stage at Southside Festival in Germany. It is an alternative music festival which has been going strong for 20 years and back in 2012 attracted a crowd of just over 50,000 attendees. If you’re not familiar with Bat For Lashes‘ music, have a look at one of her music videos to get an idea of her voice and vibe:

Kind of soothing, right? Unfortunately for Natasha Kahn, the cunts known as Die Antwoord was also performing at Southside Festival on the same day and on the same stage (Red Stage) out of the possible four stages. Bad luck of the draw, hey? However, she had a premium time slot at 20:30, while Die Antwoord had an afternoon slot at 16:00. This could possibly explain Yo-Landi’s extremely childish and jealous behavior on that day, as we came across a post in a photography forum from back in Agust, 2012 – just under two months after the festival took place in Germany:

I lost all respect for Die Antwoord after witnessing their antics backstage in catering at Southside Festival in Germany earlier this year.
A female vocalist was in her dressing room warming her voice. The dressing rooms were directly below the catering balcony where Die Antwoord were eating. This chick, whoever it was, must have been up next on the bill as her vocal warm-ups were in full swing, consistent and loud. The entire dining area could easily hear her and it sounded kinda nice, so I thought anyway. Yo-Landi Vi$$er, the female vocalist from Die Antwoord apparently thought differently:

She starts yelling, more accurately; squealing (if you’ve seen their show you will agree) into the air at the top of her voice:

The chick downstairs did stop, and then the entire catering went into a complete hush, bewildered at what had just happened.

Die Antwoord – with that one outburst of umness, it is YOU that suck!
Arrogant pricks.

This anecdote doesn’t come from just some random festival goer. His name is Benon Koebsch and he is a professional international music, band portraits & tour photographer from Australia. I went through his website and his portfolio includes bands such as AC/DC, Alice in Chains, Anthrax, Avenged Sevenfold, Blink 182, Cannibal Corpse, Clutch, The Cult, Deftones and Die Antwoord. We’re stopping right here, but go check out the complete list of international acts which he has captured so far. It is very impressive. It also speaks of some level of professionalism because not every idiot with a camera gets granted access to festivals and get to operate on this kind of level and close proximity to artists.

The incident in Germany took place, not even three months after Die Antwoord attacked Andy Butler at the Future Music Festival in Adelaide, Australia. Fast forward another two months in 2012 after Southside Fesitval in Germany, to Voodoo Fest in New Orleans. Two people who seem to be involved in the music industry had this to say about Ninja and Yolandi:

I’ll never forget that shit. Ninja was walking around naked back stage too trying to fight us they were total assholes

By now you should be familiar with Benjay Crossman, so I reached out to him to get his recollection from the incident in Germany at Southside Festival:

“I drew some hearts with a marker on the band sign on the door of Bat For Lashes. I liked her band. Twenty minutes later I was walking past and said hello. She asked me straight up if I was the one who drew the hearts on their sign and I confirmed it. We chatted for a bit and then I asked permission to take a photo of her, as there was a super strict “no photo policy” in the artists area. Around twenty minutes after that, I was sitting upstairs with Yo-Landi, Ninja and Richard (our lighting guy). We listened to the beautiful vocals coming from down below. Yo-Landi absolutely hates it when other woman get more attention than her, so she started yelling at Bat For Lashes from our table. After Yo-Landi yelled all that crap, Leo Herrera, our tour manager, came up to tell her that the organizers were upset and just laid a complaint. Yo-Landi just tries to cause shit and drama to get the attention and act all punk.”

Oh and I asked Ben if he perhaps had some video footage of the incident on that big old hard drive of his.
He did.
Look at how Yo-Landi looks around and at the camera for approval for her really ‘awesome’ and ‘funny’ behavior.
It is really fokken embarrassing, this craving for attention and acceptance:

I like how Yo-landi adds “A bit of the old Jesse..”, referring to Aaron Paul’s character, Jesse Pinkman in Breaking Bad.  Ninja has forever been trying to reach out to Vince Gilligan, the writer of Breaking Bad, to direct his (Ninja’s) Zef TV series. We all know what that turned into – some Xhosa dude with a balaclava wrapped in a blanket, saying whatever shit Ninja needs him to say.

This one sentence from Ben’s recollection kind of stood out and sums up a big part of Yo-Landi’s personality – the low self-esteem part:
Yo-Landi absolutely hates it when other woman get more attention than her
Go look at the Bats For Lashes video video again. Natasha Kahn has heaps of talent. It is understandable that Yo-Landi felt threatened by her voice and her warming up routine.

Another example? When Yo-Landi turned 30 back in 2012, she had a birthday party in the poor Jobhannesburg hood of Fietas at Slapchip’s house (one of the guys from the Rich Bitch music video) on Friday the 30th of November. Yo-Landi’s birthday is on the 1st of December (1982), so it makes sense that she would have partied past midnight to celebrate her actual birthday, probably with champagne and Savannah – the only alcohol Yo-Landi drinks. Yo-Landi and Ninja don’t really have a lot of people they can call friends, because of the way they treat people around and close to them, so she invited a few guys from Fietas (like JP from the Baby’s On Fire music video which she dated for a while, you know, for the sake of their ‘art’) and Kezia – who was probably more of an employee than a friend, as she worked her ass off on all the music video sets for Die Antwoord, and here is a shot in the dark – dealing with their shitty behavior on set on a daily basis for months on end. Unfortunately for Yo-Landi, Lady Gaga performed at the FNB Stadium in Johannesburg on November 30 in 2012 and her friend Kezia, decided to go to the Lady Gaga stadium concert in stead of Yo-Landi’s birthday party in Fietas. I mean, who wouldn’t? A small birthday party in Fietas with a bunch of guys just sitting around, swearing, smoked out of their brackets, sound like a really, really lame party. To use a word that Ninja and Yo-Landi appropriated from the kids in Fietas – it sounds like it would have been a major dwanky party.

Yo-Landi saw this as the ultimate betrayal of friendship because deep down in her heart she truly for realy realzies believes that Lady Gaga is her sworn arch enemy. Just go look at all the stuff Ninja and Yo-Landi say about the pop icon who is a thousand times bigger and more successful than them. Go look at the video Die Antwoord made for Fatty Boom Boom where they make a prawn come out of Lady Gaga’s vagina as part of their story-line and diss. The biggest irony ever? Yo-Landi’s buddy, Kezia, worked on the Fatty Boom Boom video. Her name is in the credits. Yo-Landi completely lost her shit with her “friend”.

Oh, and WHERE THE FUCK IS YOUR ADOPTED SON, TOKKIE? 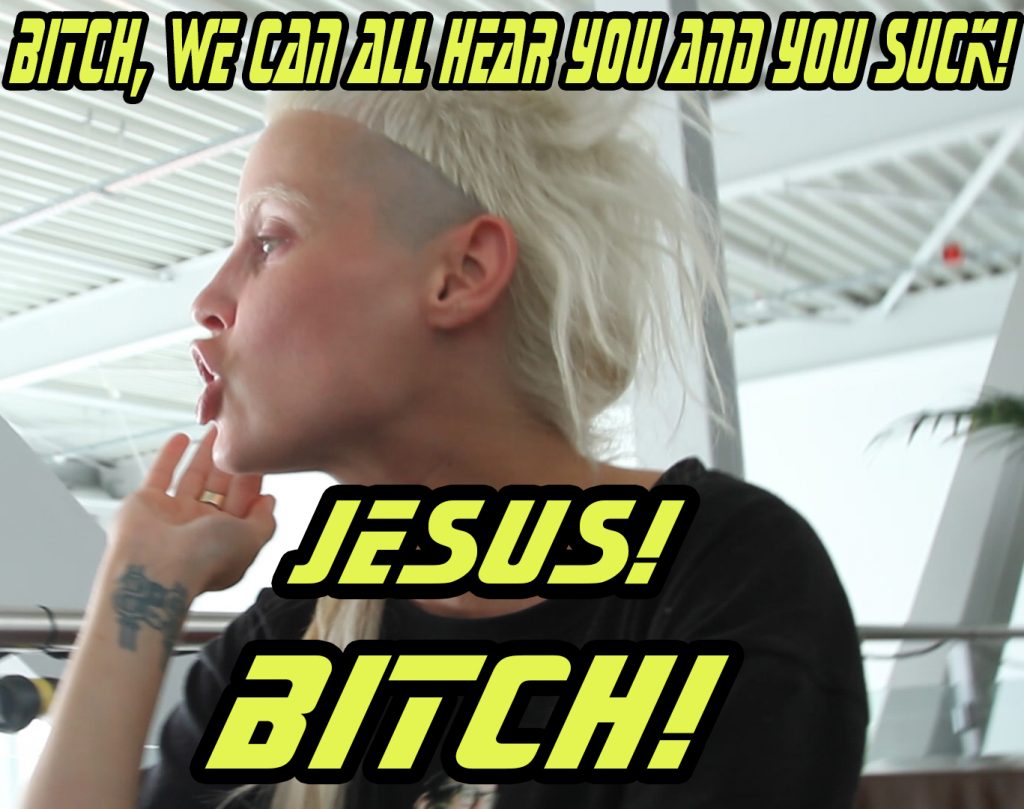