Like their new album 'Earth Rocker', Clutch rarely stays still in one place long enough to pin them down. In the midst of their current North American tour with Orange Goblin, Lionize and Scorpion Child, however, vocalist Neil Fallon did find some time to chat about their rocking new album, stoic neon faces, the Melvins and surviving Motörhead.

I discovered Clutch years ago with your first album, which is almost the antithesis of your current album – in terms of speed anyway. Why do you think that is? Most bands slow down when they get older. Why not Clutch?
Early on we were huge Melvins fans and that played a big part in our early sound.  Though we still love the Melvins, we have since discovered that that's not our sound, so to speak.  After 20 years it's easy to get comfortable and well, lazy.  Kicking up the tempo on Earth Rocker was a way to put some wind back in the sails.

This is probably a question that I should have asked after your first album, but why the name 'Clutch'? Never saw the answer to that, if it was reported on.
We were also big fans of Prong.  We liked the monosyllabic sound of that name and wanted something similar.  I recall us talking about changing the name, but apparently, we never got around to that!

Bands often implode or go through a revolving door of musicians. You've been together for 20 years (since 1993) without a line-up change. What's the secret?
A collective fear of day jobs.  And a good sense of humor.  Also, the older we get, the more protective we become of our lucky situation.  I know I took it for granted for many years.  But now I realize it is a fragile thing that should be treated with gratitude and respect.  Outside of the things that everyone else has to do, I am only obligated to either write rock and roll music or perform rock and roll music.  That's a very good spot to be in and we all know it and want to make it last as long as possible.

Do you find that you're still chasing 'the song' or 'the riff' and do you still get childishly excited about a new song/ riff/ lyric during rehearsal?
Absolutely!  Sure, sometimes it can be frustrating trying to come up with new stuff that sounds fresh.  But it's also the most fun.  Discovering something unexpected.  Thankfully we write democratically and that always makes it easier to be surprised.

What inspired the title of the album 'Earth Rocker' and the cover art?
Nick Lakiotes did a great job of visualizing the music.  Two album covers that we really looked at were Black Sabbath's 'Never Say Die' and 'Technical Ecstasy'.  Both are Hipgnosis works.  We've always been a fan of Storm Thorgerson and Nick was able to emulate the vibe while also being its own original work. 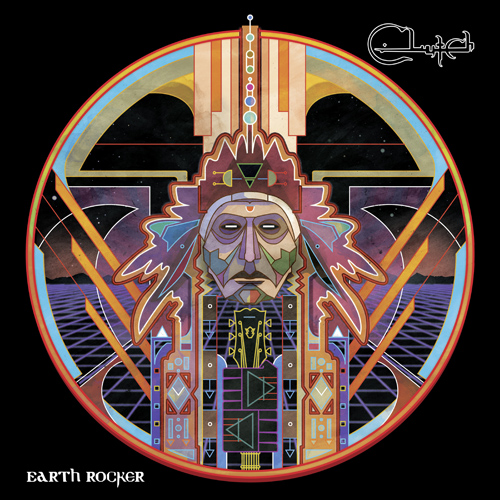 How do you decide the cover art is an accurate reflection of the album – does the designer get to listen to the tracks, is it a collaborative process or how does it work?
I work closely with Nick.  We discuss it over beers.  Hundreds of emails fly back and forth.  99% of the battle is figuring at the "what."  "How" is relatively easy.  We were going to call the album "Crucial Velocity" and the images that invoked all seemed too familiar and stock.  When we thought about "Earth Rocker" it was apparent that that name was much more fertile ground.  When Nick sent me a rough sketch of a stoic neon face…I knew immediately that that was the "what" we had been looking for.

I've seen it reported that the production of the album and the order of the tracks on 'Earth Rocker' were careful processes along with producer Machine. Care to elaborate?
We did A LOT of pre-production.  Everyone knew precisely what he had to do when we went in the studio.  This was advantageous in that we knew the parts frontwards and backwards and didn't have to sweat remembering the parts.  This allowed us to focus on the performance.

As far as the running order, there's two things I can say about that.  First, we wanted to emulate a classic LP, roughly 40 minutes with a Side A and a Side B.  Also, when we first started Machine asked us to make a setlist of what we play at festivals.  He made a playlist, listened to it and used that as a point of reference for 'Earth Rocker'.

Don't you find that the integrity of an album has lessened in importance with the preference for digital formats i.e. people shuffling on iPods rather than listening to a record start to finish, side A to B?
Yes.  I  remember very well the days when one had to drive to the special record store that sold metal or punk or hardcore.  Then it was agony trying to decide what 1 or two records would be bought with the 15 or 20 bucks in hand.  Because of that, when the records were brought home, one dedicated at least an hour listening to this investment.  It was a big deal.  There was much more time and emotion in the music listing process.  Now… well, we all know what now is like.

You're known as a hard-touring band. How long are you expecting to tour 'Earth Rocker'?
Ah man… at least until the end of 2014.  With some time off here and there of course. 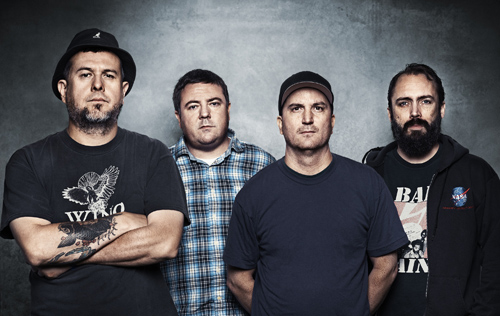 'Gone Cold' is obviously quite a departure from the signature Clutch song, albeit a brilliant one. Was there any reservations/ discussion around putting it on the album? Do you do it live?
We do it live almost every night and the crowd eats it up.  It's fun to play because it gives us a chance to clean our ears out a bit.  This was the first time around when we realized that we had to write a slow song to help round out an album.  Usually we are trying to add faster ones toward the end of the writing process.

You're touring currently with Orange Goblin, Lionize and Scorpion Child. Does the band have a hand in choosing the support acts, or is that a management thing? How do you decide who to tour with?
We make the call.  Sometimes bands are suggested by our booking agent and we say yes.  Most times we say no.  And when we take a chance sometimes those bands turn out to be great.  Sometimes not.

You've toured with the likes of Motörhead and Thin Lizzy recently. To what extent did you think it influenced 'Earth Rocker'?
Big time.  The speed of Motörhead definitely left an impression.  As was the realization that Motörhead is really just Chuck Berry and Little Richard played really loud and really fast.  And that's by Lemmy's own admission.  And Thin Lizzy, I think Brian Downey's shuffle played a big influence on JP's playing on 'Earth Rocker'.  Side B is nearly all shuffles.

Motörhead has not been to South Africa ever. Are they really 'louder than everyone else'?
Yes.  I've never seen a band go through as many monitor engineers as I did with Motörhead.

Does Clutch give them a run for their money?
Motörhead?  Hell no.  I mean shit… just look at them!

Haha, great answer! I recently got 'Earth Rocker' on vinyl. Are you part of the vinyl-collecting crowd or is it mostly digital for you nowadays?
I collect records here and there.  Most of my vinyl is stuff that I bought in the 80s.  My most recent vinyl purchase was a Band of Gypsys 'Live at the Fillmore East'.

I've been amazed by how much the awareness and support of Clutch has grown in our country since I started collecting your records 20 years ago. Do you ever receive mails or interviews from South Africa?
I think this might be the first South African interview.  Thanks!  (It is actually the second. Here is the first, done by… uhm… me.)

Have you ever heard a South African band? If so, who and what did you think of them? (You can be honest.)
You, know… I don't think I have.  But I did recently just watch 'Searching for Sugarman'.  I know Sixto is from Detroit, but the backdrop of his success in South Africa is so improbable it really is a beautifully bittersweet tale.  South Africans obviously have discerning musical palettes!

Last one, how long 'till your SA tour and how damn long 'till the next damn album?
I would love to get to South Africa.  I'm sure it would rip!  Nothing planned at the moment I'm sad to say.  I hope we have a new album out within 2 years of 'Earth Rocker'.  We just got to find the time between tours to sit down and write.

Thanks Neil. Now you readers, check out the heavy trippy 'Earth Rocker' lyric video for a good ol' bite of the new album. It's a motherfucker!