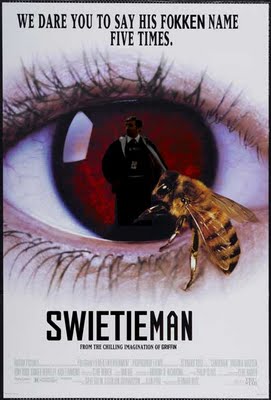 The world’s only and original Swietie-man. The character Wikus Vand De Merwe from District 9. You gotta love him. Actor and director Sharlto Copley now has a very fokken busy Hollywood schedule, but he made some special for us, his South African fans over here at www.wikus.co.za to answer a couple of burning questions.

griff: How did you find out about www.wikus.co.za and what was your first reaction? Did you want to shoot us with a prawn weapon or make us a flower from a cat food tin?

Sharlto: A friend of mine from South Africa sent me a link. I thought some of the stuff was hilarious… (interesting how you seem sure it’s really Wikus at
the end making the flower…hmmmm… )

griff: Fok, now you gonna make people speculate all over the interweb again. This is your first major acting role and from what we gather, acting was never really on the cards for you. How did the role of Wikus Van De Merwe come about?

Sharlto: I had read that Charlize Theron got discovered by throwing a tantrum in a bank. I found this very inspiring, so basically whenever I went into a bank, post office, telephone company, or government office I threw a tantrum. I did this for years without any result and I have to say I was becoming really disheartened and was seriously considering just becoming patient and polite in the face of mediocrity. However, just as I was about to give up hope completely, I happened to be at the Department of Home Affairs, giving a teller a piece of my mind and Neill Blomkamp was in the queue behind me. As I was leaving, he stopped me and said… “Excuse me, I’m shooting a film and I couldn’t help but notice your dynamic use the word “Fok” at that teller back there…” and the rest is history…

griff: I can just imagine half of Benoni going to Home Affairs after reading this. Do you sometimes go into Swietieman-mode when you and your girlfriend make the sexy time by the fireplace?

Sharlto: My friend, you are totally mis-understanding the use of the sweeties. The prawn likes sweeties but cannot make them himself, so what we do is generously give the little prawn children sweeties to bring them some happiness that their own parents cannot give. It also occupies them and makes the whole episode of dealing with the prawn easier for us here at MNU.

griff: I just thought … Fok… Never mind … If you have to give a percentage of dialogue and improvised scenes that were made up on the spot and made it into the final cut, what would that percentage be?

griff: Fokkit, that is quite cool. It worked out well. Nice. You have landed the role of B.A. Barachus in the upcoming A-Team movie. Are you going to cut your hair now all punk and wear heavy gold jewelery and stuff? What about going to the gym?

Sharlto: Again, you have your facts wrong my friend. Your question makes no sense. BA is clearly African American, whereas I am just African so I play one of the white guys.

griff: Ja, I tried to trick you there and be a sneaky fokken prwan. Regarding the A-Team movie: Will you be allowed to drive the original ugly transit van, and if so, would you please send us a photo of it from Lala Land? That would be kief.

Sharlto: Regulations prevent me from discussing the A-team but there is already a fokken picture of it on the Internet.

griff: OK, I will look for that picture then and print it out for my fridge. Do you also have a grade 1 piano or PT teacher coming forward telling magazines and newspapers what a nice kid you were, like they do with Charlize Theron? Have you met Charlize? Is she really as tall as Christopher Johnson?

Sharlto: I have a high school French teacher that has became like a second mom to me. She was at the SA premiere and I have stayed in touch with her since school. She will tell you how great I am, but probably also about how I once dressed up as a woman prostitute while on a school trip to France. I have not met Charlize yet.

griff: Do you think that you have opened doors for some of the lessor known actors that starred alongside you in District 9? Will you try and help them as well?

Sharlto: I think I have probably helped SA actors more as a producer/director – it’s tricky for an actor to help other actors get work, especially in the Hollywood system. However, I have always tried to assist talented people in whatever way I can in my career and will continue to do so. Jason Cope who plays Christopher Johnson is an enormous talent. He is actually also the lead male narrator in the film and also does the cameraman’s voice in the MNU eviction footage. I recently shot a short film with Jason and Eugene (Obesanjo) and hope to get to work with more of the D9 actors at some point in future.

griff: OK, so we would need to talk to Jason Cope then as well (nudge-nudge, wink-wink – hook us up.) What is it like to work with Neil Blomkamp and Peter Jackson? Are you now his precious?

Sharlto: Masters likes me… I loves masters… they my preciousessss….

griff: Ja, I thought so. Is a sequel in the making for District 9? If so, can we three guys have roles in the movie? Just let us know in time – we need to put in leave, hey!

Sharlto: Everybody seems to want a sequel. Can you guys speak any Nigerian languages?

griff: Hmmm. I lived in Nigeria for four years and Corne is in Somalia at the moment. That should count for something. And Shaun can fall off his bike at low speeds. Loads of talent, us. How has the success of District 9 changed your life? What are the positives and negatives?

Sharlto: Internally nothing has really changed, but externally my career choices have changed massively. I get to do what I love every day. I get to work with top people in the business, see the world and live a very luxurious life style. I still can’t believe I get to fly fast class after all those years of 32 hour trips in economy. The down side is that I am away from home a lot.

griff: You should let your girlfriend go with you, man. Sies! When you are back in South Africa, can us three meet you at a secret location like MNU for a quick lunch? You can have cat food and we can have prawns.

Sharlto: Get your people to call my people and we’ll do lunch!

griff: Dis ‘n fokken deal! Tell us a secret or interesting fact about District 9 that you have told no-one else in Hollywood or South Africa that would make this interview seem like the coolest interview ever.

Sharlto: The story of how Wikus’ “sweetie man” technique was born: Wikus was born on camera in a short test film Neill made. (which has never been released) In the film, I had to go around to human occupants of shacks and “evict” them, to make space for “aliens” that MNU wanted to put into the area. We shot in Kliptown and improvised with real residents who knew it was a film but gave amazing performances. While we were shooting, a lot of kids would gather around and I figured that Wikus would try and manipulate people’s kids into liking him so as to give him more clout with the parents. I asked somebody to get me some sweets from a nearby vendor and then on camera I approached one of the kids trying to be as charming as possible… saying “It’s the sweetie man…” with a cheesy grin. The kid promptly
started crying and ran away. I did it a couple more times and the other kids all took the sweeties…

In the CJ eviction/sweetie scene in D9, (probably my favourite scene in the film) Wikus doesn’t put the amount of enthusiasm and effort into giving little CJ the sweetie that he usually would because he’s having “a really
bad fokken day.”

griff: Hahaha, I think a lot of people enjoyed that scene a lot. The hand-granade-cat-food scene also comes to mind. Thanks so much for taking the time to answer our questions. You’ve made a whole bunch of people in South Africa fokken proud! Good luck with filming the A-Team and hopefully we’ll chat again soon.

There you have it District 9 fans. That was pretty fokken cool, hey? Ja, it was.