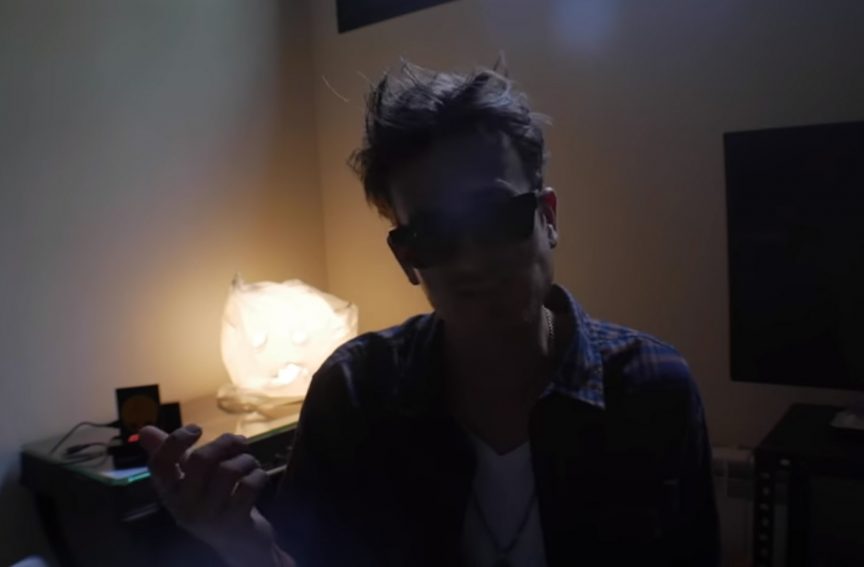 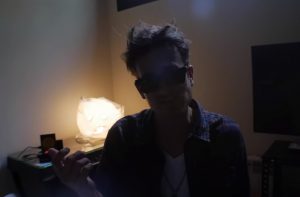 Edwin Costa has been covering almost every aspect of Die Antwoord’s predatory and abusive behavior which has surfaced in various forms of evidence over the past six months or so. In his most recent video Edwin interviews Ben, Die Antwoord’s former artistic collaborator, who was flown in by Edwin for the on-camera interview, so he is really putting a lot of time and effort into this whole unmasking saga and trying to find justice for those who have been victims of Die Antwoord’s stampede. Ben has seen and filmed a lot of things during his time on tour with Die Antwoord across the globe and has a lot to say – in his own voice, on camera. Understandably, the complete interview will only be uploaded in October because lots was said and covered. Edwin’s extract will give you a pretty good insight as to what to expect more or less in the follow-up videos.

Apart from talking to Ben, Edwin also addresses a section of the leaked phone call between Ben and Tyson, the Australian tour manager for Die Antwoord back in 2012. What is also interesting is that Edwin made contact with Die Antwoord’s sound engineer, Diak. He was the person shouting “fucking faggot” in the Adelaide video. Like Tyson, he was willing to talk about what really happened, but only off the record, because of a heavy “non-disclosure agreement” he signed with Die Antwoord. That actually says a whole lot more about the abuse than actually keeping quiet about it:

I can’t speak for Edwin, Ben, Zheani and others, but I am pretty sure, like myself, they also have a fuck load of better things to do with their time in stead of going down this seemingly never-ending spiral case leading to the pit of shit that is Die Antwoord. We have only scratched the surface and unfortunately we are probably the only people who can see this through to the end and try and help the countless victims coming forward. By exposing die abhorrent behavior and abuse we uncover, it hopefully gives victims the courage to come forward and speak up and so far it has been working, albeit slowly.

Apart from the victims there are still those who surround Die Antwoord on a professional level and who are willing to look the other way and take their money or make “art” with them. In the previous article I briefly referred to Dune Tilley, who, at the age of 19, seemed ignorant an eager enough to risk an entire creative career ahead of him by working with Die Antwoord whilst conveniently looking the other way. The very next day after the Watkykjy article, all traces of his involvement and collaboration with Die Antwoord’s Zef TV suddenly disappeared as if by magic. just a brief overview of Zef TV as mentioned before – it is  the show that Ninja initially pitched to Sony as a fantasy inbred fuck-fest (here is the link to the actual leaked Sony email) where they get to star in it with their daughter and all the models and actors. The new Zef Tv is unfortunately not the show Ninja had in mind, because what they are doing now is trying to preempt whatever else might surface in the coming weeks and months and explain and normalize their behavior ahead for the fans – they are grooming their fans for what is to come.

With all the terrible news on rape and murder in South Africa over the last week or so and tempers flaring up over specific cases, a lot of disingenuous men where white knighting all over social media. Conveniently with all his ties to Die Antwoord now out of sight all of a sudden, Dune Tilley felt like he had to add his voice to the already massive cloud of white noise out there as well: 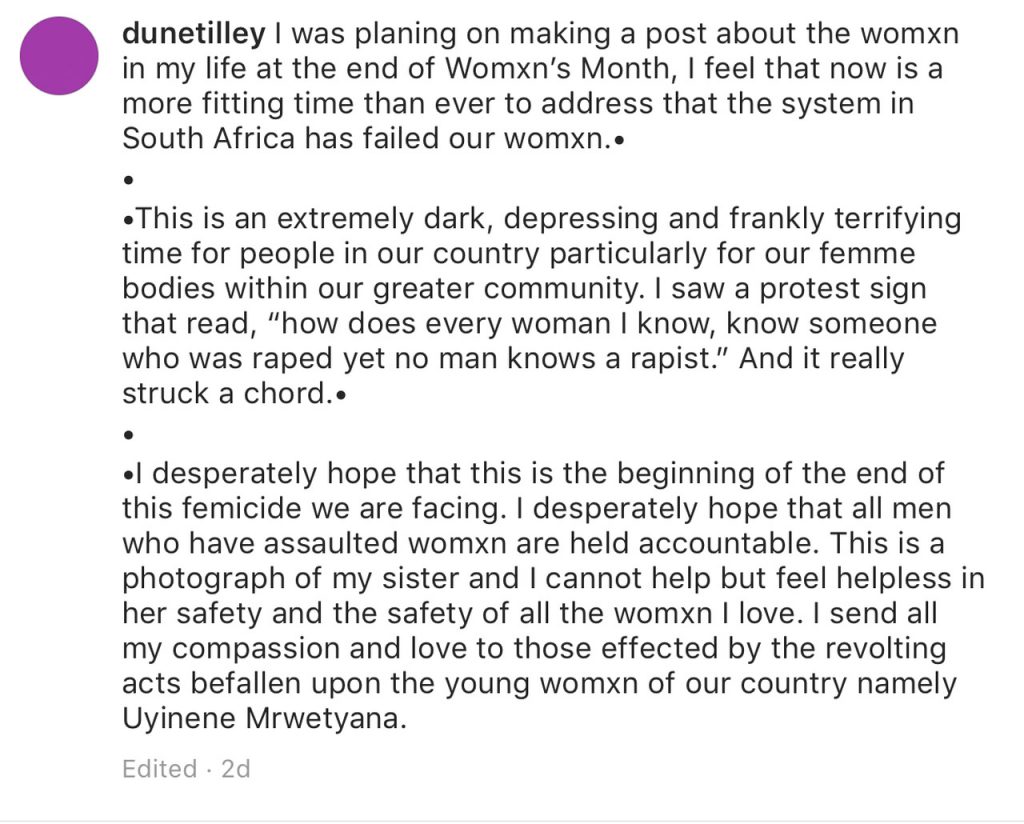 I was planning in making a post about the womxn in my life at the end of Womxn’s Month, I feel that now is a more fitting time than ever to address that the system in South Africa has failed our womxn. This is an extremely dark, depressing and frankly terrifying time for people in our country particularly our femme bodies within our greater community. I saw a protest sign that read, “how does every woman I know, know someone who was raped yet no man knows a rapist.” And it really struck a chord. I desperately hope that that this is the beginning of the end of this femicide we are facing. I desperately hope that all men who have assaulted womxn are held accountable. This is a photograph of my sister and I cannot help but feel helpless in her safety and the the safety of all the womxn I love. I send all my compassion and love to those effected by the revolting acts befallen upon the young womxn of our country namely Uyinene Mrwetyana.

Of course he got all the comments and praises that he was looking for, such as “Such beautiful honest words” but when I commented and asked him how he could “stand up” for woman while at the same time work for abusers such as Die Antwoord, I got blocked.

I dropped the kid an email, basically asking him the same questions I got blocked for on Instagram and he responded with the following email:

Hi Griffin! I see you are very upset, validly so. I was intending on making a more object piece about them, after the edits were done by their team I realized it wasn’t what I thought it would be, So I’ve now stepped away from them and am publicly distancing myself from the work. – I do intend on making a statement but in my own time. Thanks for the email.

I am probably being a total jerk now, but jargon like “their team” doesn’t fly with me. And quietly getting rid of photos and removing links on Instagram isn’t my idea of “publicly distancing” yourself. In fact, it is almost literally the opposite. Me being a jerk again, but  when is “in my own time”? When does that happen? The skeptic in me thinks that he ever intended to do anything about it at all. I think he was waiting it out and waiting for things to calm down and dissipate.

You need to remember that on the first episode of ZefTv which was done by Dune (the title actual says so -“By Dune”), it was used to explain and normalize Die Antwoord’s physical violence and in the second episode he tries to portray them as a loving family who likes cooking vegan food and appreciate art. The only thing missing in the video was the fucking bible. Towards the end of the episode you can’t help but think that it is a more cringey rip-off of the old 80s South African kids TV show, Zapmag. And true as fuck, the episode ends with “Zee you zoon, Zappers”. Die Antwoord can’t help but to absolutely appropriate everything they see, touch and hear:

I haven’t even gotten around doing a proper interview with Zheani, but we are in contact. She was the very first victim who was brave enough to step forward and (very publicly) speak up. And she got slut shamed, victim-blamed and fucked up in the worst ways publicly from all sides by rabid, crazy Die Antwoord fans for doing so. They also get fed straight up lies by Y0-Landi’s friend for instance, suggesting that Ben is part of the plan and that they “allow it for now”. So Ben getting death threats is part of one big elaborate marketing plan? Never in her wildest dreams thinking that Ben would actually speak up in a video. Yet, the clueless people eat it that shit up: 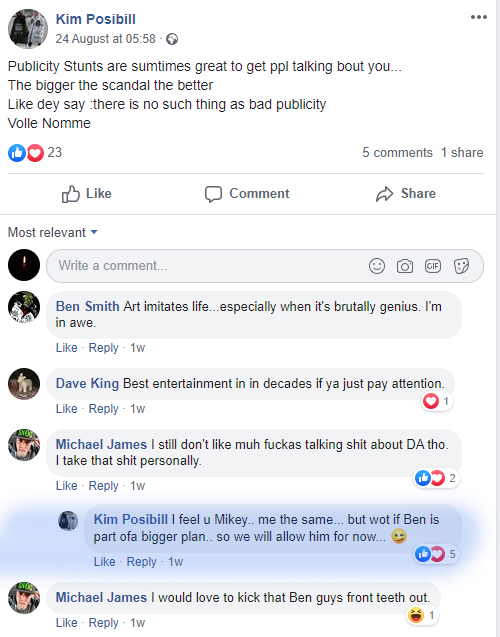 I also find this Facebook post of her very fucking ironic, when she herself is grandstanding for a sexual predator and actively taking part in abusing and slut shaming a victim on behalf of Die Antwoord:

Zheani has recently had a one-one-one interview with a journalist from the Sydney Morning Herald, a well-known and respected publication in Australia. Probably the biggest legit newspaper Down Under. She presented her case, story and evidence to the publication who has also consulted with their lawyers before going to press. That coverage should come out next week at some point.

As mentioned in one of the earlier articles from a few months ago, delving through this whole mess takes a lot of time and it can’t be rushed. There are still a lot of people on the list to talk to and that is growing. Apart from that,  I have recently fixed a phone of someone who used to be close to Die Antwoord and we’ll start dealing with what we find in messages, emails and WhatsApp messages as we go along. Unfortunately this fuck-up is far from over and you can expect Die Antwoord and their diminishing crew and support system to try their best to deflect attention from their abusive behavior and make up lies and elaborate stories, because not in a million fucking years will they take responsibility for any of their actions. 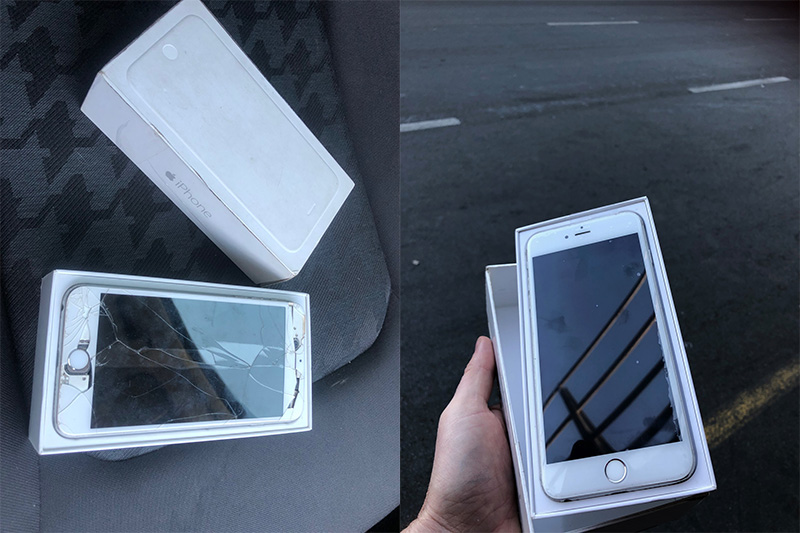